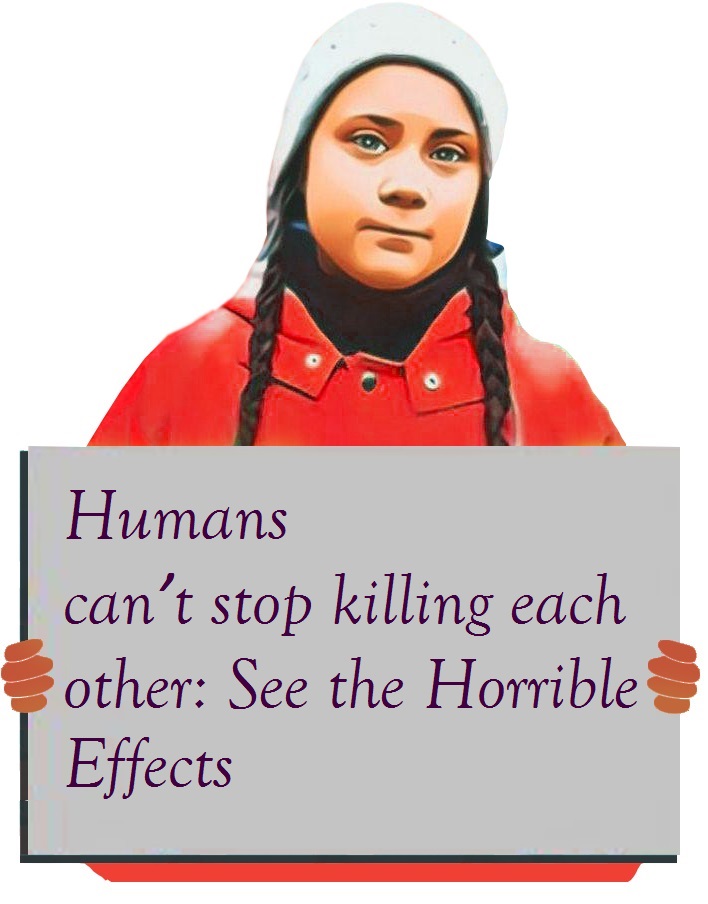 “Mention ‘destroying the planet’ to most people and they quite rightly think about Climate Change. But did you know that warfare and arms manufacture is nearly as destructive? For example, there have been ONE MILLION deaths from wars since 9/11, including 300,000 in the dreadful Yemen conflict. Also, the horrible Syrian civil war has caused 14 MILLION to flee from their communities. So, dear readers, whilst Britain and America dedicate themselves to zero net carbon emissions, we should realise that the three largest manufacturers of weapons of destruction are American, followed by Britain and France!!”

Many people believe that Global Warming and Climate Change are the main or only causes of Destruction of our Planet. Or maybe, they believe that wars and destruction are caused by climate change, shortage of food or migration due to starvation.

These things are of course true, but behind the scenes are wars caused by national rivalry, the actions of psychopathic leaders, desire for conquest, struggles for power, religious conflict and a whole raft of causes which have little to do with climate change. But what such wars do is almost as bad for the Planet as the effects of excess carbon dioxide and other greenhouse gases in the atmosphere.

At any one time in the last 50 years, since World War Two, there have been armed conflicts between nations, tribes and psychopathic leaders. Oppression of whole populations caused by violent groups and individuals have caused endless misery and yes, destruction of the planet.

If we look under the surface, an even more horrendous scenario begins to show is ugly face. Here is a quick count of the nations that possess Nuclear weapons, capable of wiping out whole nations, most of which make the American obliteration of Hiroshima and Nagasaki seem rather puny:
United States, Great Britain, Russia China, France, Israel, India, Pakistan, North Korea all possess nuclear weapons capable of causing massive long lasting damage.

And equally horrific, but maybe a small touch less destructive, are poison gases, some of which can also wipe out whole populations.

And a bit further down the “Food Chain” of destruction are so-called “conventional weapons”, bombs, rockets, guns, military aircraft and high explosives.

All of this can validly be called DESTROYING THE PLANET just as much as burning coal, oil and gas – owning and using gas-guzzling vehicles, over-eating red meat. Maybe the main differences are that most commentators are fixated on the more conventional aspects of global warming and have not realised that there are many ways of destroying the planet.

So, I will have a look a the array of weapons of destruction  – and maybe more interesting, who makes and trades them…

The largest arms manufacturer in the world, Lockheed Martin specializes in everything from global defence, security and aerospace.

Boeing, which is one of the most well-known manufacturers in the world, focuses on selling everything from aeroplanes to rockets, satellites and telecommunications equipment.

Raytheon is the world’s largest producer of guided missiles.

The American company focuses on weapons and military and commercial electronics.

The company is the largest defence contractor in Europe.

The British company specializes in multinational defence, security, and aerospace technology. Its arms trade revenue was $22.9 billion in 2018.

Northrop Grumman Corp. has over 85,000 employees.

The company also focuses on defence and aerospace and is also one of the world’s largest weapon manufacturers.

Here are some of their and other arms manufacturers Products…….